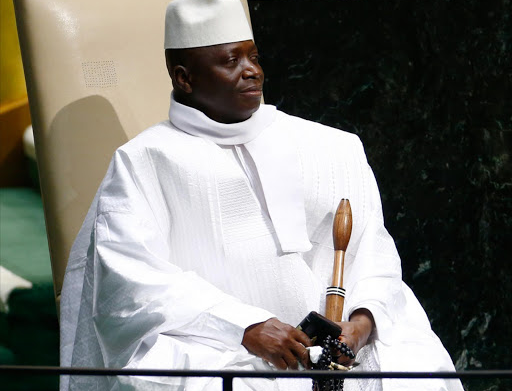 May 31, 2018 – Three survivors of Yahya Jammeh’s fraudulent and destructive HIV and AIDS “treatment programme” have today filed a legal action in the High Court of The Gambia.

Fatou Jatta, Ousman Sowe, and Lamin “Moko” Ceesay are suing the former Gambian president. They are seeking financial damages for harm suffered and a declaration from the High Court that their human rights were violated.

The civil action, which marks the first time Yahya Jammeh is being sued in the Gambian courts for abuses he committed while he led the country, is supported by the international advocacy organization AIDS-Free World in partnership with the Gambian-based Institute for Human Rights and Development in Africa (IHRDA). Combeh Gaye of the Gambian law firm Antouman A.B. Gaye & Co. is representing the three claimants.

In 2007, after announcing that he could cure AIDS with a secret herbal concoction, Jammeh conscripted Gambians living with HIV to reside in a state facility under the surveillance of armed guards and to submit to a “treatment” regimen. Many Gambians who entered Jammeh’s programme were members of HIV and AIDS support groups.

Jammeh ordered his “patients” to cease taking antiretroviral drugs, an action that posed grave threats to their health. Instead, he had them drink herbal concoctions that often made them violently ill. He also slathered his concoctions on the patients’ partially nude bodies while chanting prayers. Select sessions were broadcast on Gambian television without the consent of the victims, some of whom hadn’t yet informed friends or family of their HIV status.

The program ran from 2007 until 2016, when Jammeh lost a national election. After initially contesting the results of the election, Jammeh fled the country in January 2017. He is now living in exile in Equatorial Guinea.

According to a Gambian newspaper report from January 2016, the director of Jammeh’s treatment programme claimed that “over nine thousand patients” had been treated by the Gambian president, “the majority of whom … were HIV patients.” In April 2018, the same official, Dr. Tamsir Mbowe, vastly revised the figure during his testimony before a commission of inquiry examining his role in the “cure,” claiming just 311 HIV and AIDS patients were treated from 2007 through 2012. The precise number of deaths as a consequence of Jammeh’s criminal mistreatment remains difficult to determine.

“I believe it is my responsibility to hold Jammeh to account,” said Ousman Sowe, who is a former university lecturer. “I knew that one day the real story would be told.”

“My experience in the presidential treatment programme was a horror,” said Fatou Jatta, who was a member of the Santa Yalla Support Society when she was brought into Jammeh’s program. “I could have lost my life.”

Lamin Ceesay was the first person in The Gambia to publicly reveal his HIV status. As such, he feels it is his duty to set the record straight on Jammeh’s negligence. “Jammeh must pay for what he has done to us,” he said.

The Institute for Human Rights and Development in Africa noted the historic nature of the filing. “This case will advance human rights protection in the Gambia, particularly with respect to people living with HIV, who are highly stigmatized and marginalized,” said Oludayo Fagbemi, Legal Officer with IHRDA. “We are happy to be supporting the claimants in this case.”

Combeh Gaye, the Banjul-based attorney who is representing the three claimants in the proceedings, said, “The claimants have suffered enough. We are confident that the court will find that Jammeh has caused them undue harm and will reward them appropriately.”

AIDS-Free World’s Legal Research and Policy Associate, Sarah Bosha, called Jammeh’s brutal hoax the most egregious premeditated assault on people living with HIV and AIDS in the history of the global AIDS crisis. “There is no cure for AIDS. When an individual of great power claimed otherwise, human health was jeopardized, lives were cut short, and a deadly epidemic was prolonged—all in the service of the insatiable ego of Yahya Jammeh, one of the great villains of modern times.”

Saramba Kandeh, AIDS-Free World’s Legal and Gender Associate, hopes that Jammeh’s life story will end with a powerful warning. “We believe this legal action will be a signal to the world that regardless of how rich or powerful they may be, malicious leaders who violate human rights can and will be held accountable,” she said.

Since March 2017, AIDS-Free World, IHRDA, and attorney Combeh Gaye have been working together to help survivors of Jammeh’s fraudulent “cure” pursue justice.