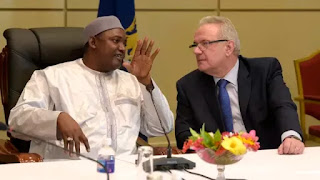 —————————————————
The recently concluded two-day Donors’ Conference on The Gambia hosted by the European Union in Brussels closed on a high note with a total of €1.45 billion in pledges from donors to help finance the 3-year National Development Plan (NDP) 2018 – 2021 of the coalition government of President Adama Barrow.

In addition to this amount, the European Union is contributing €140 million in grants on top of the € 225 million already committed by Gambia’s single biggest donor.  The total amount pledged is roughly equal the amount The Gambia came to Brussels to raise in pledges that led the EU Commissioner to declare the two-day affair a great success.

The eight priority areas of the NDP aimed to ensure sustainable and inclusive were fully supported by the EU.  Further support of government priorities areas of democratic reforms, agriculture, promoting job creation for the youth, in energy sector and granting access to renewable and sustainable energy for the Gambian people.

The Gambian delegation shared the sentiment of the EU Commissioner that the conference was highly successful, confirmed by the competing press releases from State House touting similar sentiments and urging Gambians to come out in droves to welcome the president from his Brussels trip.

Now Read This:  GAMBIA: BREAKING NEWS-PRESIDENT BARROW WINS ROUND ONE LEGAL ARGUMENTS AT THE SUPREME COURT; AS COURT THROW AWAY KUMBA JAITEH’S REQUEST TO RESTRAINT FODAY GASSAMA BEING SWORN IN AS AN MP!

We expect that once the celebratory mood has waned and reality sets in, the daunting task of managing the high expectations driven, in part, by the citizen’s lack of familiarity with and understanding of what transpired in Brussels will begin.

Managing high expectations starts with explaining to Gambians that a pledge is nothing but a promise.  Thus the €1.45 billion in pledges by the donor community is a collection of promises from donors – both bilateral and multilateral – to contribute towards the financing of the projects and programs suggested in the National Development Plan.  As expected, the World Bank, AfDB, IsDB, BADEA, EIB will provide the bulk of the financing of the NDP on concessionary terms.

To illustrate our point, the State House is reporting on its Facebook page that France appears to have been the first to transform its pledge into a €50 million actual contribution towards the global figure of about a billion and a half euros in pledges.  The swift decision by France did not come as much of a surprise as the level of its contribution, given its increasing role and influence in post-Jammeh Gambia.

That said, the road to translating the €1.45 billion pledges into actual contributions had just started and it is going to take a great deal of effort to reach the goal because the international community is notorious for failing to fulfil their pledges.  Haiti, Syria and, most recently, the Democratic Republic of Congo, are few examples where actual contributions fell far below pledges.  In the case of Haiti, the figure was as low as 30% of pledges and even lower in the case of the Haiti Trust Fund housed in the World Bank.

Therefore, to translate pledges into contributions would require renewed commitments by the Barrow administration to institutional and structural reforms – something they’ve been reluctant to do so far – while taking firm steps on the fiscal front to provide the financing of the other half of the total cost of the NDP, according to the official submission of the Gambian delegation to the conference.

The challenges on the fiscal as well as the monetary fronts are daunting.  Government must explain the process to ordinary Gambians to avoid misconceptions or run the risk of having government initiatives buried by national euphoria, driven more by politics than rationality, a condition that Alan Greenspan referred to as irrational exuberance.  They must understand that to transform pledges (promises) into actual contribution usually is contingent on further conditionalities imposed by prospective donors.

It is encouraging, however, that President Barrow saw the need to signal, upon his return from Brussels, that the time for politics is over.  The time has come to work hard towards national cohesion to achieve the objectives of the economic and social agenda set out in the National Development Plan.  President Barrow’s legacy, a major preoccupation of his, rests, in large part, on how successful the implementation of the new undertaken will be.