In May of last year, Khadija Saye was a promising young artist celebrating a major win in her career: she was being exhibited in Venice, at the world’s most prestigious art festival, alongside some of the biggest names in the art world.

But just a month later she was dead. She lived with her mum, Mary, on the 20th floor of Grenfell Tower, and on the 14th of June last year she became one of the 72 people who lost their lives.

On Monday, her family paid tribute to her life at the beginning of nine days of commemorations, which will see dozens of bereaved families remember loved ones.

Her father, Mohammadou Saye, stood in front of a packed room and remembered his daughter, in a statement read by solicitor Marcia Willis Stewart. “She was very gentle, very kind and friendly,” he said. “Her burning passion was photography, encouraged by her mother, Mary Mendy, who also lost her life in the same fire. Khadija said to me one day: ‘Daddy, I’m in love with images’.

“It was this passion that Khadija pursued to the end because it gave her great satisfaction and brought her some joy and happiness.” 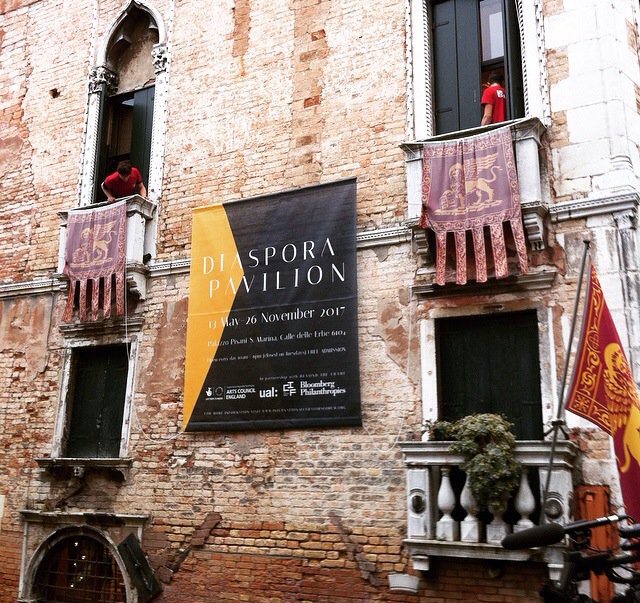 It’s been a real journey, but mama, I’m an artist exhibiting in Venice and the blessings are abundant!

In the year since her death, Khadija’s work has been exhibited at Tate Britain and Kettle’s Yard in Cambridge, as well as featuring in leading art publications. But experts who have embraced her work say it shouldn’t be overshadowed by the manner of her death.

Jennifer Higgie, editorial director at Frieze magazine, told HuffPost UK: “Grenfell shouldn’t dominate how we see her work – she had a whole life before that terrible night so it’s important that life is honoured.

“There’s a richness and joy to her work and it’s her exploration of her Gambian roots. Her work is really interesting in how it explores the intersection of her ancestry from Gambia and her own body and living in London.

“That’s where the potential lay.”

Oliver Basciano, international editor at Art Review, agreed, adding: “Her work was poignant and spoke to the difficulties, traumas and complexities of identity without us needing to think about the the sadness of her death.”

Born in London, Saye lived with her Gambian mother Mary Mendy, who also died on June 14. She had gone to a local school, but at 16 won a scholarship to the prestigious Rugby school.

Basciano said Saye talked about “going to this posh boarding school coming from an immigrant background and living in a housing block in west London … That complexity is very much in her work and you can certainly see it comes from her biographical circumstances.”

He added: “There can be a risk of overly sentimentalising her work. It can lead to it not being looked at on its own terms. Her work is a picture of growing up in Grenfell, and about the complexities of her identity.”

In the weeks after her death, it was announced that some of her photographs would be exhibited at Tate Britain, one of the most prestigious galleries in the UK. Andrew Wilson, senior curator for modern and contemporary British art at the musem said that at the time she was killed Saye “only just starting to get public recognition through her body of work”.

He said the gallery had chosen to exhibit her work last year “to celebrate her achievement” and to “to stand in some way as a means to remember her and her neighbours in the community in Grenfell Tower who were tragically killed on 14 June 2017.”

On Monday, the MP for Tottenham, David Lammy, joined Mohammadou Saye on stage as tributes were paid to the mother and daughter. The Labour politician was a friend of Khadija and has been a vocal campaigner for survivors and bereaved families since the fire.

Snippets from a BBC documentary she was due to appear in before her death were also played to the hearing, showing her smiling and laughing as she talked about her passion for photography and how her upbringing influenced her art.

It was a day of harrowing contributions from many families, heard at the Millennium Gloucester hotel in Kensington by an audience that included Elizabeth Campbell, the leader of Royal Borough of Kensington and Chelsea, which owns Grenfell Tower, and Commander Stuart Cundy of the Metropolitan police, who is overseeing the criminal investigation into the fire.

Tributes were also read out for Mary Mendy, Khadija’s mother. The body of the 54-year-old was recovered from the 13th floor after she tried to escape the flat she shared with her daughter.

Her niece said: “My aunt was my hero, she has been in my life for every major event, she is my mum as well as my aunt.”

“For the first time in my life my aunt is not a phone call away”, she added.

“She was warm and kind, she welcomed everyone into her home. Grenfell Tower was a place all her family and friends could find shelter if they ever needed it.”