Reports reaching this medium have revealed that the former Agric Minister Omar Amadou Jallow widely called O.J. has filed a civil suit before the High Court, claiming the sum of 20 million dalasis and one million dalasis against three journalists of Kerr Fatou – an online media outlet.

The defendants are Fatou Touray, Mustapha K. Darboe and Alagie Yero Jallow all carrying on journalism business under the name and Style Kerr Fatou.

According to the writ of summons, ex-minister Omar A. Jallow is claiming against the defendants an order of mandatory injunction compelling the defendants jointly and severally to remove and withdraw the offending defamatory publications from all their online news platforms and websites forthwith.

Ex-minister Jallow is also claiming an order of mandatory injunction compelling the defendants jointly to publish a written retraction and apology on behalf of the Kerr Fatou news platform and websites for the defamatory publications.

An order of mandatory injunction compelling the 1st, 2nd and 3rd defendants individually and personally to each publish a retraction of their individual false and defamatory stories and an apology to the plaintiff both on their online platforms and websites and also in at least two (2) newspapers with wide coverage in The Gambia. 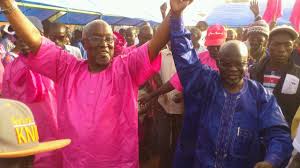 Judicial sources have indicated that the suit is yet to be assigned to a judge for mention.